Superhero themes in television and film have been on a major upswing for quite a while now. What arguably started with the beginning of the X-men and Spider-man movies way back in 2000 and 2002 respectively, and was cemented by Iron Man in 2008, has now become a multi-billion dollar franchise for multiple companies. Marvel Studios, the biggest contender in the market, has made painstaking strides to link there television and movie properties into one ever expanding universe.

DC Entertainment, on the other hand, has decided to copy the main traits of one of their own creations, Bizarro. As Bizarro was known for his insane ability to always behave the opposite of Superman, so has DC made it their goal to make all of their major decisions as Bizarro versions of Marvel’s. Instead of a linked television and movie universe they have separate actors for each. Instead of solo superhero films leading up to a group film, the opposite. Besides this insane mimicry of one of their own villains they still remain a worthy opponent for Marvel in the superhero world.

No matter who is making these properties the simple fact remains that they are a cash cow that Hollywood can’t help but keep on milking. And why shouldn’t they? Well, according to the denizens of the internet, the superhero trend will soon meet it’s end at the hands of the worst villain of all: viewer disinterest.

Many articles have started popping up all over the internet claiming that silver screen superheros are not long for their digital world. Some writers cite drops in opening box office numbers. Others claim that original content will cease to exist. No matter the reasoning one thing is clear, many believe that superheros are not a lasting concept when it comes to digital media.

These theories seem to forget one very crucial example of the superhero industry’s longevity, the comic book industry itself. Somehow they push aside the fact that comic books have been around for over 70 years. And those years have not all been easy. They had to deal with early detractors, the dreaded comic book code, a period of near complete disinterest around the 1950s, and worst of all, the creation of Aquaman.

In all of these cases the industry stepped up and faced the challenge to keep their business afloat. They continued to write even though some thought they were writing filth. They found ways to make their product interesting even with the looming threat of being shut down by the comic code authority. They innovated and created new and entertaining properties to get through stages of disinterest. And they gave Aquaman a sweet spear for a hand. 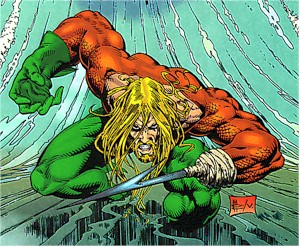 One of the reasons for the industry’s continued success in the face of adversity can be found by looking at the human race itself. We have always had a fascination with super powered individuals. This can be traced all the way back to multiple civilization’s mythologies.

The Norse had Thor (who we have since recycled), with the ability to conjure thunder. The Egyptians had Anubis, half man half wolf. The Greeks has Zeus, Hades, Hercules, Athena, and many other recognizable figures. And of course the Romans used the same technique that Marvel and DC comics have used so well on each other throughout the years: they stole all their characters from the Greeks, gave them similar abilities, and then renamed them so as not to impose on copyright agreements. (They had those in the Greek and Roman civilizations, right?)

Obviously these characters are all religious in nature, but they complete the same function that our modern days heroes do. They gave people in the past something to look up to, idolize, and dream about.

With the comic book industry being around for well over a century, and the concept of superheros being around for thousands of years, I find it hard to understand the negativity and mistrust in the future of superhero movies. We as a race will keep on innovating new and entertaining tales. We may flounder at times (every Fantastic Four movie ever) but we will get past these mistakes. In the end the superhero always wins.