Lady Macbeth is quite possibly the darkest, most depressing film I’ve seen all year, and I loved every second of it. This is largely due to William Oldroyd’s deft direction. The story of a young woman married off (sold) to a sniveling aristocrat is right about where the genre conventions end. If you’re looking for a period piece to watch on a lazy Sunday afternoon, Lady Macbeth is not your ticket. Oldroyd crafts a pitch-black tale of feminine power without flinching, and the young Lady Katherine is not to be crossed.

I wasn’t surprised to learn that Oldroyd comes from a theater background. In an interview with Variety he said, “I know nothing about cameras whatsoever.” His lack of expertise doesn’t show, but he does settle in for some excruciating long-takes and supremely uncomfortable moments throughout Lady Macbeth’s sparse run-time.

Oldroyd is also a former student of theology and almost became a priest. As such, Oldroyd combines biblical proportions of darkness and adds a Shakespearean twist to Lady Macbeth. It’s bleak, it’s more than a little hopeless, and it shows us the complicated story of a woman breaking free from patriarchy by any means necessary. Oldroyd commented on Lady Macbeth’s source material, “It’s a cracking read. We’re used to so much literature of that period where women either suffer in silence or run away. Katherine full-bloodedly takes her destiny in both hands. It’s in the Jacobean tragic tradition.” He clearly loves this stuff, and I’m right there with him.

Brigsby Bear explores a concept that is becoming more and more popular in film: Why are millennials the way the are? In this instance the specific topic is the obsession that millennials have over pop culture, especially TV shows and film. Director Dave McCary is no stranger to pop culture having directed and written for SNL and the popular YouTube series Epic Rap Battles of History, and he does a great job of bringing to life writer and star Kyle Mooney’s unique vision in Brigsby Bear.

McCrary opens the film in the most pop culture way possible by bringing us straight into an old episode of the fictional television show, Brigsby Bear Adventures. It is shot in a super retro way that looks very VHS quality. It is also very reminiscent of many classic kids shows, like Power Rangers. Probably the best moment in the retro episode comes when a giant sun with Mark Hamill’s face pops up, a clear reference to Teletubbies or Legend of Zelda.

The later moments in the film deal with James’ (Kyle Mooney) obsession with the show. There is a stark contrast in the way that these scenes are filmed. We get bright happy scenes of James filming his final episode of Brigsby Bear intertwined with more drab and muted shots of his family worrying about his stunted reality. It is a very interesting way to show the differences in their concepts of the importance of the show. Throughout these last scenes McCary paints a very clear picture about how sometimes what is perceived as a weird obsession may sometimes lead to a work of art, which in the film’s case is James’ final episode of the show. 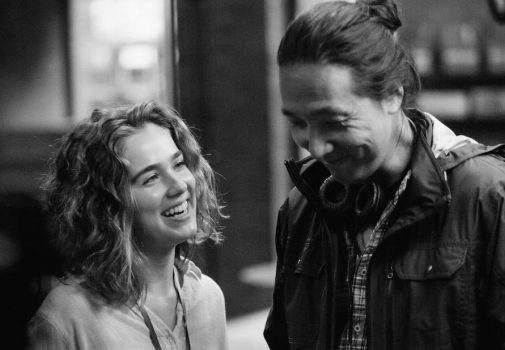 Columbus is easily one of the most beautiful films of 2017. It is kind of strange that a film that is really just a series of discussions and people looking at architecture could be described as such, but it is true. First-time director Kogonada made a sumptuous, human film filled with wonderful, raw performances and it took me completely by surprise.

Kogonada, amazingly, had never even set foot on a film set before shooting Columbus. He had made some brilliant video essays on Vimeo, so he was well-versed in film and the editing process, but to deliver this film without ever being on a film set? That is insane.

You can credit some of the success of Columbus to his actors. John Cho and Haley Lu Richardson give career-best performances as they tell the story of two people grappling with their futures and their relationship with their parents. But the script, written by Kogonada, is as equally masterful as the performances. Much like the many of the buildings around Columbus, Indiana, the film is based in symmetry.

Richardson’s Casey is devoted to taking care of her mother, who is recovering from drug addiction, but it is holding her back from pursuing her future. Cho’s Jin doesn’t have this type of devotion to his parent. He and his father haven’t spoken in over a year and they may never get to as his father has slipped into a coma. Casey loves architecture while it only reminds Jin of his father, who is a professor of architecture. Both Casey and Jin are being held back by their feelings about a parent and their reticence to confront uncomfortable truths, but in completely different ways. It is a profound, elegant story to match the gorgeous images of cinematographer Elisha Christian.

Both as a director and a writer, Kogonada completely hit it out of the park with Columbus. It is fitting that his moniker is a variation on Kogo Noda, the long-time screenwriting partner of director Yasujiro Ozu. Many have compared Columbus to Ozu’s work and I’m sure Kogonada would be delighted to hear that. Much like Ozu’s films, this beautiful, human film unfolds patiently. As Justin Chang for the L.A. Times said in his review, “[T]he movie may indeed test the limits of your attention span at times, but always in the interests of expanding your vision and clarifying your perceptions. If you find yourself losing interest, you have only yourself to blame.”