Ruth has just had the worst day in every way possible and then it is capped off by a home invasion and robbery of her laptop and grandma’s cutlery. She thinks back on the day with her friend Angie and makes her extremely nihilistic carbon remark. This is a clever and darkly funny way to put the viewer in the shoes of Ruth, who has pretty much had it with people and life in general.

This is one of the most horrifying scenes of 2017, in large part due to the chilling monologue of Jared Leto’s Niander Wallace. Examining a newborn specimen, Wallace pontificates on the nature of replicants with the nauseating poetry of a true madman. As Luv stands in tow, Wallace delivers his emotionless speech amidst the grotesque evisceration of his own creation. Blade Runner 2049 examines the unique qualities that make us human. Niander Wallace makes a strong case for lacking any semblance of humanity whatsoever. 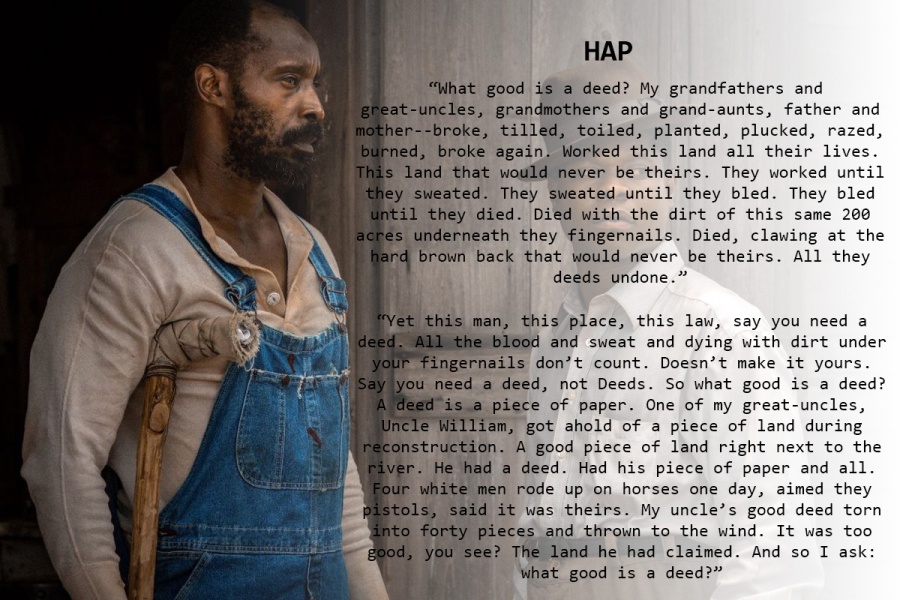 Voice over is often considered a crutch in screenwriting, but what writers Virgil Williams and Dee Rees do with it is anything but a crutch in Mudbound. Throughout the film, we hear voice over from many of the characters reminiscing about their lives and the struggles they face. Set during and immediately following World War II, Mudbound shows us the stark differences between a white and black family in rural Mississippi. The patriarch of the Jackson family, Hap, delivers this brilliant monologue (spoken by an incredible Rob Morgan) as he is toiling in the field. He reflects on how difficult it is for black people to get ahold of their own land, recounting his own family’s struggle. Rees and Williams wonderfully juxtapose the different meanings of the word “deed” against each other. Despite their deeds, sweating and bleeding working in the fields, the deed (that piece of paper) seems out of reach. This monologue is followed shortly thereafter by the white McAllan family rolling into town and easily taking a piece of land for themselves. Hap is right. What good is his hard work? What good was that piece of paper his Uncle William had? What good is a deed? 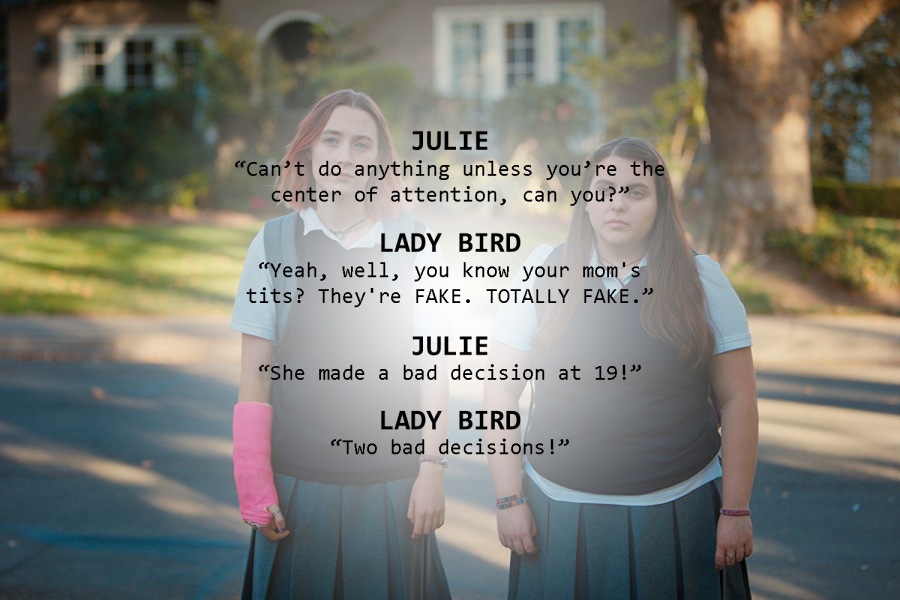 Midway through the film Lady Bird tries to talk to her friend Julie, who she has somewhat neglected due to hanging out with the “cool” kids, and they start arguing. This hilarious exchange brings their fight to an end and reflects both of their personalities perfectly. Julie just wants to be there for Lady Bird and connect to her through their common interests in acting, while Lady Bird just has to have the last word. 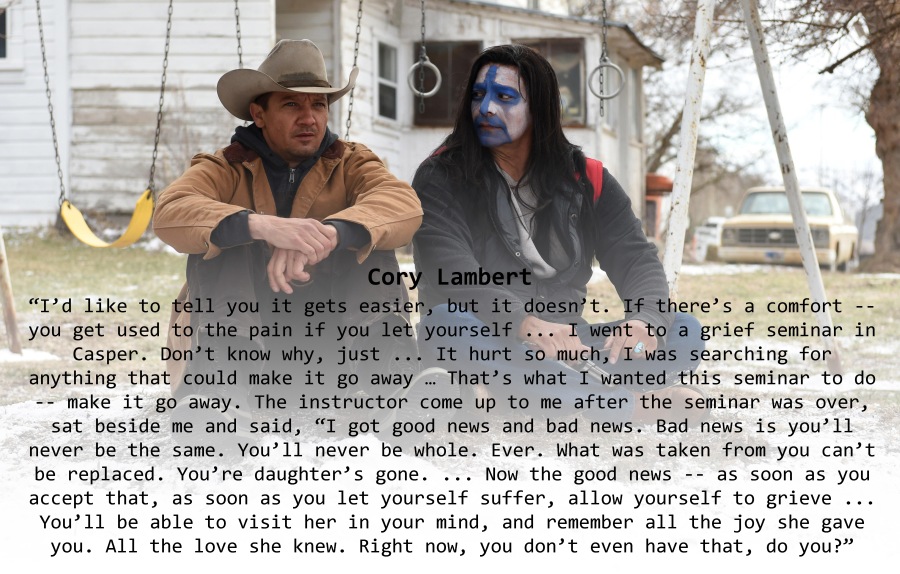 Corey Lambert, a fish and wildlife agent, speaks to his friend Martin Hanson in this monologue about grief. Martin’s daughter, Natalie, was found frozen to death on the Wind River reservation after being raped and beaten. In this poignant scene, Corey shares with Martin his own experience of losing a daughter. These are both hard men who have never learned how to grieve, much less share their emotions. This raw, human interaction is a hallmark of Taylor Sheridan’s screenwriting, and Wind River rests squarely on the foundation of these true-to-life characters.

The Shape of Water – By Guillermo del Toro & Vanessa Taylor 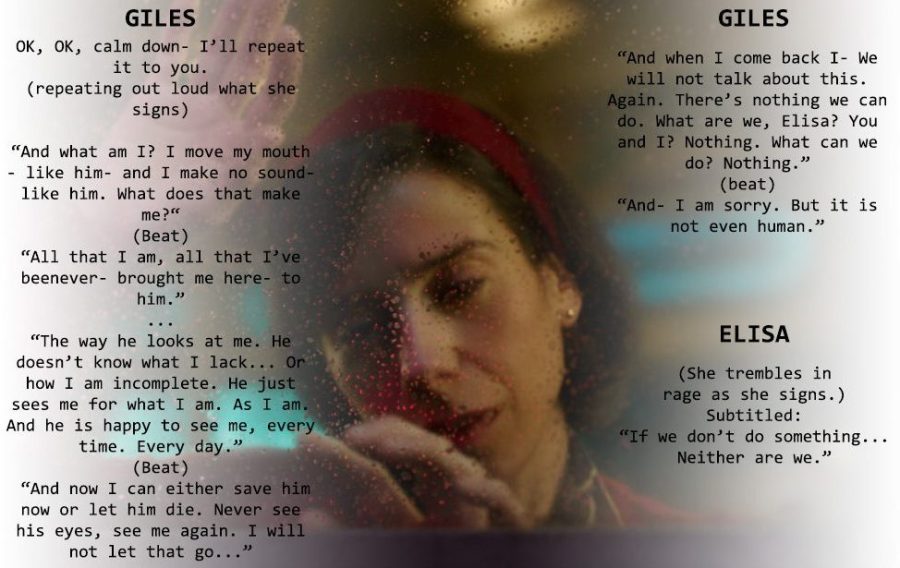 This scene perfectly encapsulates the brilliance of Guillermo del Toro and Vanessa Williams screenplay for The Shape of Water. Having Giles repeat what Elisa is signing to him is an extraordinary idea. It is one of those conversations that perfectly sums up the themes of the film without feeling like it is doing so. Perfectly acted by Sally Hawkins and Richard Jenkins, the scene pops off the page with an immense amount of emotion. It is a beautiful, tender moment where a mute woman is able to be heard and a powerful moment where we are able to recognize the humanity in “the other”.  The Shape of Water on its surface may be about a woman falling in love with a fish-man, but this conversation shows us that it is really about a woman finding her other half and finding someone who understands her.